You are here: Home / Archives for Symbol of Strontium

Get the full information on Strontium valence electrons and know this element in a good manner. We will further provide the other significant characteristics of this element. As we all know Strontium is a chemical element in the chemistry branch of science. It has the representative symbol of Sr and the atomic number 38.

How many valence electrons does Strontium have?

The element belongs to the category of Alkaline earth metals. It has the physical appearance of soft/white-yellowish metal. Strontium makes the dark oxide layer in the exposure of air and oxygen. It further resembles the chemical properties of calcium and Barium.

Being the earthly metal Strontium is available in abundance within its natural form. The chemical element is extracted from the minerals celestine and strontianite. The mines of Strontianite were first discovered in the Scotland region during 1790. So, Scotland is the land of discovering the Strontium. 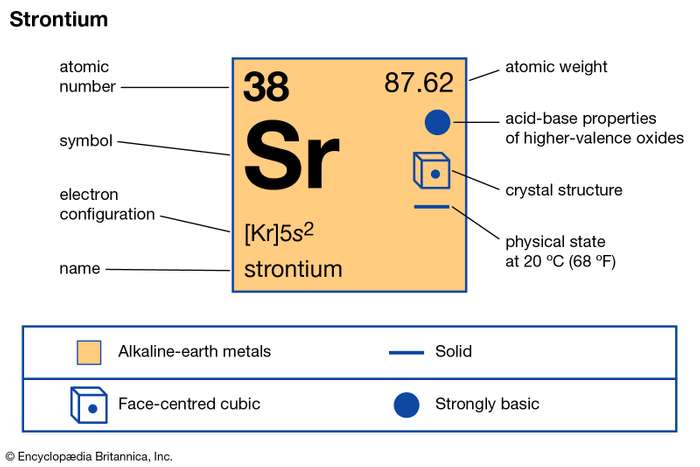 Strontium had the major usages in the early stages of black and white or color televisions. It had a significant contribution in the manufacturing of cathode-ray tubes for televisions. A significant portion of Strontium is still useful in the sugar manufacturing process. There are other forms of strontium that are useful in the toothpaste industry.

Strontium is useful for the human body just like calcium since it works just like the alternative. So, in conclusion, Strontium is very useful chemical element both for humans and commercial purposes as well. 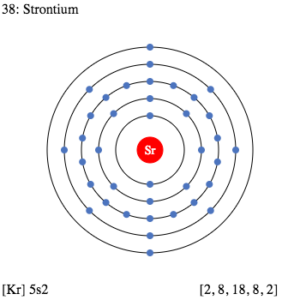 It can further explain the chemical bonding of valence electrons. You will be able to learn the pattern of bonding in terms of single or double bonding.

Strontium holds 2 valence electrons hence its valency is 2. Valency is the combining capacity of Strontium with other chemicals elements in its surrounding. Check the periodic Table site Now.