Krypton is a chemical element that has a chemical symbol Kr. The atomic number of Krypton is 36. It is a member of group 18 of the periodic table. It is odourless, colourless, tasteless noble gas. It occurs in a little amount in the atmosphere. It is sometimes used with other rare gases in fluorescent lamps. With some of the rare exceptions, Chemically Krypton is inert. 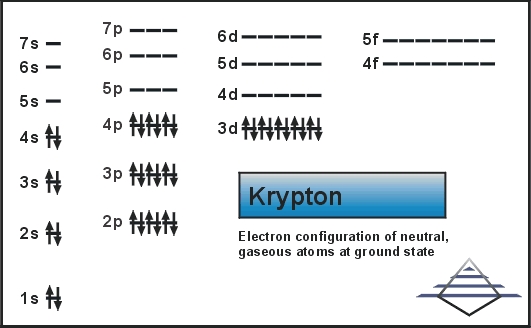 Like the other noble gases, Krypton is also used in photography and lighting. Light of Krypton has many spectral lines, and krypton plasma is used in high-powered gas, bright lasers each of which amplifies and resonates a single spectral line. It also makes a useful laser. Today we are are going to share the information about Electron configuration for Krypton.

What is the Electron Configuration of Krypton

How Many Valence Electrons Does Krypton Have

There are eight valence electrons in the outer shell of Krypton.

Krypton has eight valence electrons in its outer shell.